Pope receives portrait of Jesus as a sugarcane worker

May 30, 2019 – by Christina Hermoso posted on Manila Bulletin 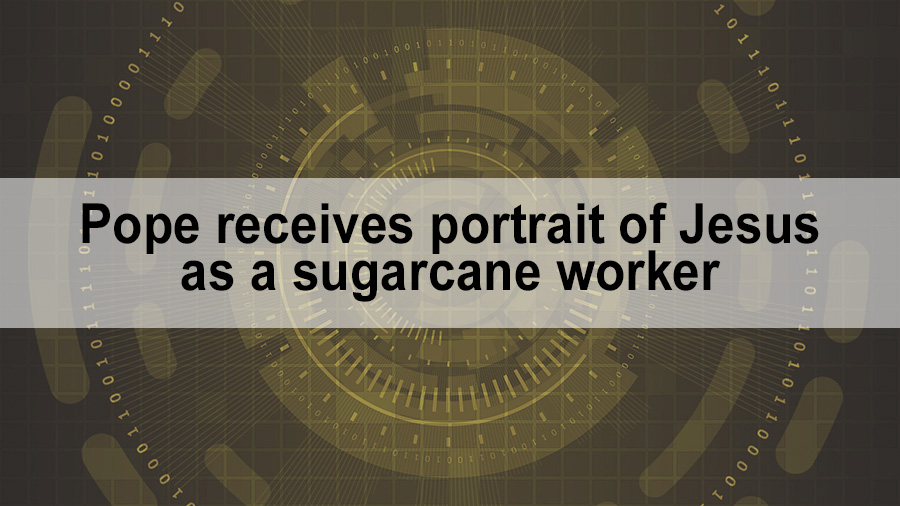 San Carlos, Negros Occidental Bishop Gerardo Alminaza gifted the Holy Father Pope Francis with a beautiful painting of Jesus portrayed as a sugarcane worker to highlight the plight of the sacadas in Negros.

Alminaza, who is in Rome, Italy for the Filipino bishops’ Ad Limina visit, presented the artwork to the Pontiff during an audience. Painted by Augustinian Brother Jaazeal Jakosalem, the artwork “challenges the faithful to see Jesus in the struggles of sacadas,” the prelate said in a Catholic Bishops’ Conference of the Philippines News post.

Among the accompanying symbols of the artwork are a cane knife to symbolize the hard-work of the workers and bloodied-bullets to depict the violence committed against farmers.

Alminaza lamented that the workers “are being unjustly paid and do not receive social and health benefits despite their contribution to the economic growth. They fought for land and justice— ending up dead from the very hands of our state forces,” he said.

The bishop is in Rome for a week-long Ad Limina visit, along with 28 other bishops from the Visayas and the Bicol region.

Bishop Alminaza said the spate of killings in the province continues to alarm the diocese. He asked for prayers from Pope Francis for the victims of the killings and the families they left behind and for an end to violence in Negros.