COMELEC-Negros Oriental is ready for the final testing of vote-counting machines. Thousands of machines, ballot boxes, battery packs, and other equipment were successfully delivered all over the province. Read more. 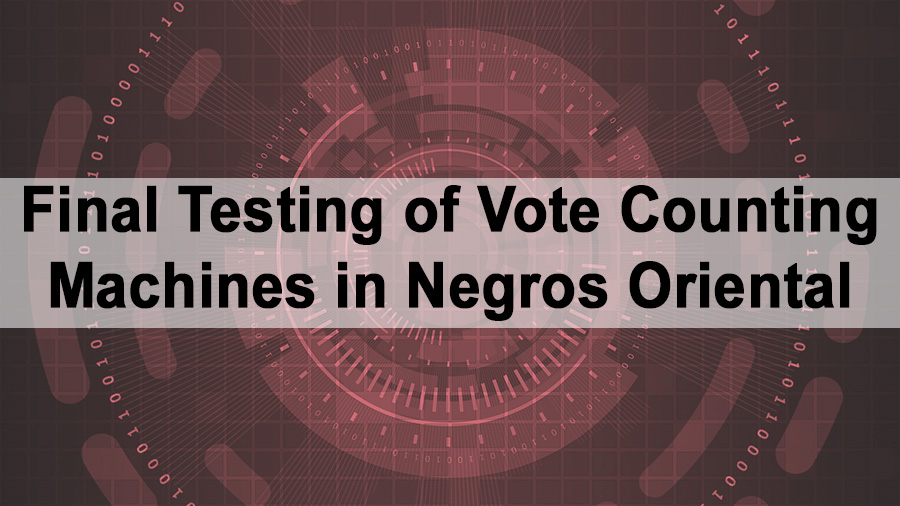 The Commission on Elections (Comelec) in Negros Oriental is now ready for the final testing and sealing (FTS) of the vote counting machines (VCMs) that will be used in the May 9 national and local elections.

Lawyer Lionel Marco Castillano, Comelec-Negros Oriental provincial election supervisor-designate, told the Philippine News Agency on Tuesday that except for minor hitches, Monday’s delivery of the VCMs and other election equipment and paraphernalia to all the towns and cities in the province was successful.

“The final testing and sealing of the VCMs will be held on May 5, as ordered by our regional director, to give us enough time for trouble-shooting in the event that some problems may arise prior to election day,” Castillano said.

“Except for the official ballots and the contingency VCM units, we have majority of what we need for the elections,” he added.

The activity was also witnessed by the Comelec-accredited citizen’s arm, the Parish Pastoral Council for Responsible Voting, which is a member of the Diocesan Electoral Board.

Election officers received the VCMs and stored them at a secure place while the city and municipal treasurers took charge of the ballot boxes.

Castillano said the VCMs will only be deployed on May 5 to their assigned voting precincts for the final testing and sealing, but an election officer may opt to conduct a centralized activity for all units assigned in his or her locality.

“The election officer may conduct the centralized FTS at a central school or gymnasium after which the VCMs will be returned to storage and will be deployed on election day,” he said.