There are plans to build a floating wharf in Apo Island. This topic is heavily discussed by scientists, residents, and environmentalists. Develop or protect is the question which has to be asked. The following article was published in Dumaguete Metro Post. It reflects the momentary situation in January 2023. 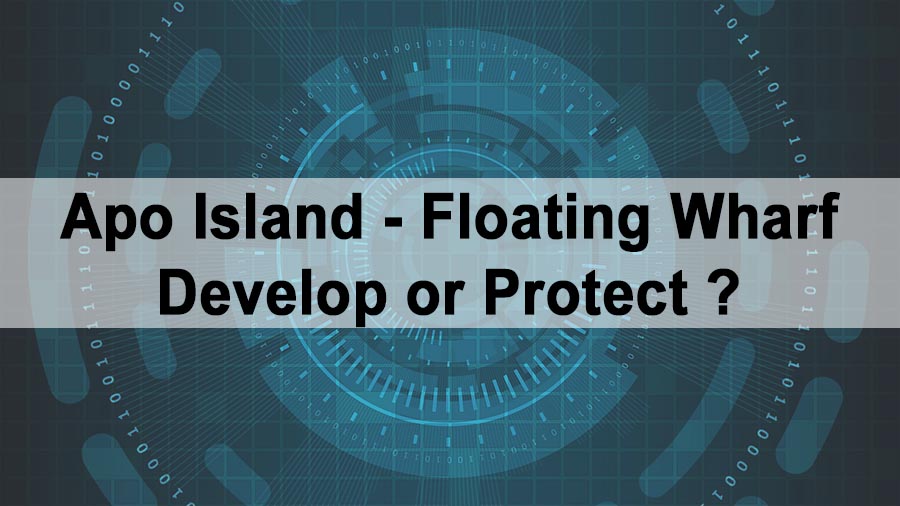 Scientists and residents of the internationally-renowned Apo Island Protected Landscape & Seascape off the coast of Dauin, Negros Oriental, are divided on the proposal to put up a floating wharf in the 74-hectare island. Proponents of the wharf say this is aimed at providing “ease and convenience in travel, and transport of goods and delivery of medical services”.

“This will provide safety and comfort not only to the people of Apo but also to tourists, especially the aged and the handicapped,” said Apo Island Barangay Capt. Mario Pascobello.

The DENR AIPLS-Protected Areas Management Board passed a Resolution in November giving the municipality of Dauin clearance to apply for an Environmental Compliance Certificate to build a jetty port at Apo Island.

Apo Island is the country’s premiere model of community-based coastal resources management off the coast of the town of Dauin, about 16 kilometers south of Dumaguete. Income from tourism alone at Apo Island during the pre-pandemic period was highest at P14 million, coming only from entrance fees, snorkeling, and SCUBA diving fees. Incomes from boat rentals, souvenirs, eating places are earned by the residents themselves conducting their respective livelihood; while income from green turtle-related activities goes to the Apo Island SCUBA/Snorkeling Equipment Rental & Guiding Association (AISERGA).

Pascobello explained that with the proposed port being movable, it will be stationed at Cogon Point from July to September during habagat (southeast monsoon), and towed to the Baybay area by October during amihan (northwest monsoon). Baybay is nearest the Chapel Point coral reef, the habitat of the green turtles where snorkeling is popular; while Cogon Point is about a kilometer from the Apo Island Marine Sanctuary in Purok Ubos where SCUBA diving is regulated.

The location of Cogon Point, however, is not indicated in the feasibility study.

There will be “very minimal impacts on the environment”, Pascobello assured. “In fact, this plan is even better than the current practice as boats will no longer be allowed to drop anchor when docking at the floating wharf,” he added.

Pre-pandemic records at PAMB show that about 20 to 40 boats dock in Apo Island each day, bringing in more than 200 tourists on average.

Pascobello said the local government of Dauin will fund the total cost of P207 million for the jetty port project at Apo Island, including a terminal with a comfort room and a dressing room. The budget also includes the construction of a wharf for barangay Maayong Tubig which will be the site of the new jump-off point to Apo Island.

For the past several years, the main jump-off to Apo Island has customarily been at Malatapay in barangay Maluay in the next town of Zamboanguita, which has since evolved into a thriving Livestock Market on Wednesdays. Locals and tourists alike visit the Malatapay makeshift stalls to sample their famous lechon and fresh sutokil.

Scientists from the Coastal Conservation & Education Foundation Inc. and the SU Institute of Environmental & Marine Sciences, however, are not too happy with the modernization plans for Apo Island, and appealed to the Apo Island PAMB to carefully deliberate as well on the disadvantages of the proposal, and consider the science behind.

In a review of a feasibility study on the establishment of the Apo Island floating wharf prepared by the proponent, the local government unit of Dauin, and presented to the PAMB in November last year, scientists Dr. Aileen Maypa and Dr. Janet Estacion listed some factors why the plan needs to be studied further after the Apo Island PAMB voted to give the Dauin municipality permission to apply for an ECC.

“We requested at least for a one week review time since the 44-page document was only given to us a few minutes before the presentation,” Dr. Maypa recalled.

Proximity to marine sanctuary. The science experts Maypa and Estacion warned that the 75-meter distance north of the Apo Island Marine Sanctuary that the LGU proposed for the jetty port is a “threat to the recovering biodiversity” in the area. Dr. Maypa recalled that Apo Island was badly hit by typhoon Sendong in 2011 and supertyphoon Pablo in 2012.

National Scientist Dr. Angel C. Alcala agrees. “I spoke with Barangay Capt. Mario [Pascobello] last month, and I advised him to locate the jetty port farthest away from the marine sanctuary,” Alcala told the MetroPost. Reduced fishcatch. Maypa and Estacion said the installation of fixed structures in the area will also “impede fish movements” that earlier studies had shown a diverse ‘spillover effect’ of juvenile and adult biomass.

Maypa’s earlier studies found that Carangidae (like jacks, pompanos, mackerels) that grow longer than one foot make up more than 50 percent of the annual fish yield in Apo Island. Dr. Alcala said he had also warned Barangay Captain Pascobello, who is the head of PAMB, to avoid the negative impacts of the project on fisheries, the main livelihood of the community of Apo Island.

The marine biologists also expressed concern about the construction of columns on the beach where the sea meets the land (intertidal) upto the shore (subtidal) which they warned will “cause sedimentation that will directly impact the corals”.

They said photosynthetic marine organisms (like corals and marine plants) are likely to die when shaded by the boardwalk. Maypa and Estacion added that the proposed jetty port at Apo Island, classified in 2003 as an “environmentally-critical area” by the Department of Environment & Natural Resources, is a violation of the agency’s own policy.

“The point of declaring a space a ‘protected area’ is its unique biodiversity values that people rely on for food and livelihood,” explained Dr. Maypa.

She said Apo Island is one of few protected areas in the country “where we put biodiversity first over development”.

“If we prioritize ‘development’ in Apo Island – which has been declared a protected area – it contradicts its own essence as stated in the NIPAS Act” (National Integrated Protected Areas System), Dr. Maypa said.

As a protected area, any changes in plans and infrastructure have to get the nod of the Department of Environment & Natural Resources, and have to be contained in its five-year management plan. Otherwise, they need clearance to apply for an ECC – as in the case of the port jetty proposed two months ago in November, and which got approved on the day of the presentation to PAMB.

“Otherwise, they will be violating their own rules,” Dr. Alcala lamented. “So we have to continuously monitor what projects will be established in the area or they will destroy themselves!,” he added.

Dr. Alcala, now 93, reminisced his more-than-half-a-century body of work with the Silliman University Marine Laboratory when they initiated the establishment of Apo Island as a no-take zone in the 1970s, earning for it world recognition as a model of community-based coastal resources management.

“Apo Island already has a reputation as an outstanding protected area of the world. It is well known in other countries, such as the United States, Australia, and other nations in Asia and Europe. Putting a structure in or near the sanctuary could diminish its reputation and value as a protected landscape and seascape, and eventually could ruin the sanctuary, and the biodiversity species that exist on the island, including the fish population, turtles, and other marine species,” warned Dr. Alcala.

The former DENR Secretary said the agency and the Apo Island Protected Landscape & Seascape PAMB should “look more into the legalities, advantages/disadvantages, as well as the long-term effects, if the project being planned is to be approved or endorsed.” (Irma Faith Pal)