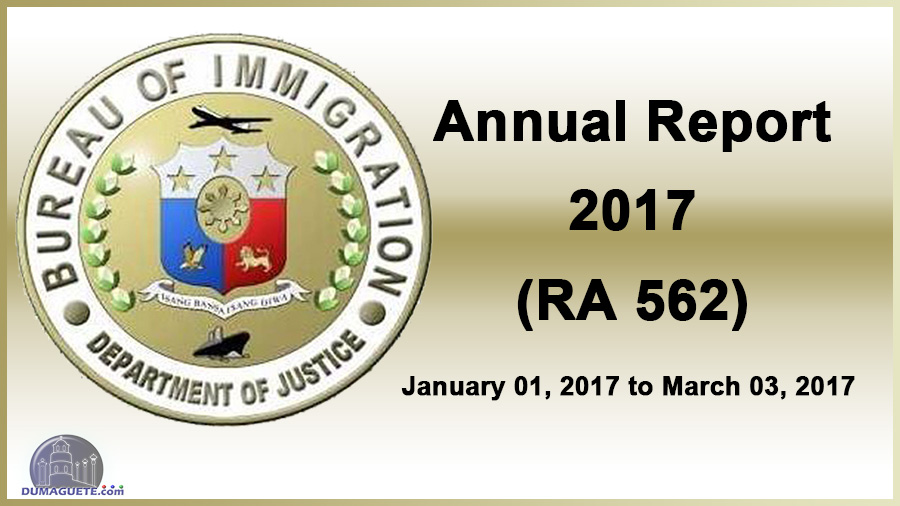 All registered foreigners must file their annual report 2017 in the first 60 days of the yesr to the participating BoI Office. The Dumaguete Immigration District Office is the place to go for foreigners in Negros Oriental.

Registered aliens have until March 3, 2017 to report in person at the Bureau of Immigration offices and pay the annual fee, as provided for under Republic Act 562 or the Alien Registration Act.

Bureau of Immigration (BI) Commissioner Jaime H. Morente invited all registered aliens to visit the Head office in Intramuros, Manila or any of the Bureau’s field offices. “The Annual Report of registered aliens is required by R.A. 562 and they have to do this within the first 60 days of every year,” he said.

The BI Chief stressed that the Annual Report period is non-extendible and warned that “failure to comply shall result in imposition of administrative fine and/or imprisonment at the option on the Commissioner.”

For aliens who are less than 14 years of age, Morente said it shall be the duty of their parent or legal guardian to report on their behalf.

The rules state that aliens making the Annual Report shall each pay to the government an Annual Report Fee of P300 and Legal Research Fee of P10.

They shall also present their original and valid Alien Certificate of Registration Identity Card (ACR I-Card) and a confirmation number issued to them via the Bureau’s Annual Report 2016 Online System.

An alien may no longer report in person if he had personally appeared in at least one of the Annual Reports held in 2014, 2015, or 2016 and upon presentation of a Special Power of Attorney (SPA) and valid identification document by his legal representative.

All aliens are encouraged to report and remit the Annual Report fee payments at BI designated offices, the list of which can be can found in the Bureau’s website.

The Dumaguete Immigration Field office is quite small and very busy throughout the year. You can speed up the process by being prepared. Have all your papers ready, bring the required printouts, copies and/or pictures.