Martial Law in Negros Oriental is eyed as a solution to stop the killing. With all the stabbing, shooting and killings in Negros Oriental, Philippine President Duterte can use his emergency power to declare martial law in the country or a part of it. According to the president’s spokesperson, it may happen soon. 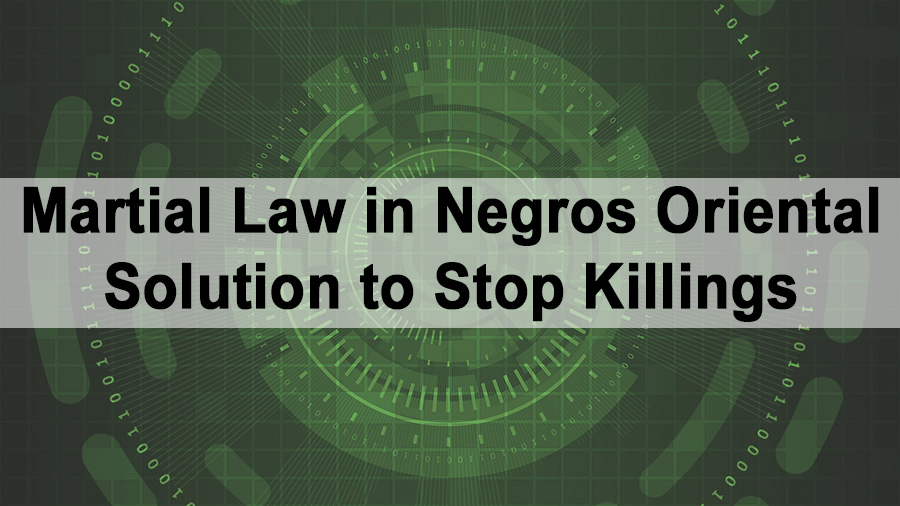 Malacañang said President Duterte may place Negros Oriental province under martial law to put an end to the killings supposedly carried out by members of the New People’s Army (NPA). Presidential spokesman Salvador Panelo said the President will not hesitate to use his emergency powers to quell the lawless violence in the island, as well as to crush all forms of threats aimed at destroying the government.

He said the Chief Executive might make the decision on which constitutionally-granted emergency power he will exercise to address the lawless violence in Negros Oriental.

“From his speech last night, it appears to be soon. Because according to him the unrest there has become widespread,” he said.

“Grabe na yung patayan doon (The killings there have gone too far). We have a village, or a barangay captain, a municipal mayor, four policemen, and a lawyer. The President doesn’t want this to happen. He wants it stopped and the only way to do that is to use his emergency powers,” he added.

According to Panelo, the communist rebels have exploited the land unrest and turned the province into a quasi-state.

“They have arbitrarily chosen who will own the lands subject of the controversies surrounding them,” he said.

Should the President decide to declare martial law, Panelo said it will be separate from the one being enforced in Mindanao since it is allowed under the Constitution.

“The Constitution says you can declare martial law in the entire country or part thereof,” he said.

Panelo said the President will place Negros Oriental under martial rule if the military on the ground or local officials would recommend it.

“He always follows the advice of those people in the know,” he said.

He added that the President thinks the police cannot handle the killings in Negros Oriental, prompting him to exercise his emergency powers.

“From the judgment of the President, it appears to be so (the police cannot control it). Especially, he mentioned last night that mas maraming sumusuporta ngayon sa mga NPA (there are many people supporting the NPA). They’re taking advantage doon nga sa pagkakagulo ng mga away sa lupa (of the land disputes),” Panelo said.

Panelo also said that the government is not helpless against communist insurgents despite the bombings that took place in Mindanao which has been under martial rule for the past two years.

“Kung helpless tayo ‘di hindi na tayo makakapagdeklara o makakagawa ng bagay para sirain yun (If we are helpless, then how come we are able to declare martial law or implement measures to quell the threat),” he said.

On Thursday, President Duterte raised the reward money to P5 million for the capture, dead or alive, of the killers of the Negros policemen, and to P100,000 for every participant in the killing.

Duterte also said that the NPA in Negros had gone overboard and that their killings have become brazen and unbridled to include men in uniform as well as civilians who were are murdered with impunity.

“The President will obey the constitutional command to serve and protect the Filipino people at any cost, and to fiercely save the Republic from imminent ruin,” Panelo said.

“The President vows to replicate the atrocious acts done by the communist rebels to the civilians, the barangay officials, and the law enforcers against these murderers in defense of our countrymen,” he added.