40 Million Doses of COVID Vaccines in the Philippines

A total of 40 million doses of COVID vaccines, Pfizer-BioNTech vaccines, were procured by the Philippine government for 2021. With the rise of COVID cases and the continues spread of the virus, the country is eager to vaccinate as many Filipinos as possible. Some areas of the Philippines has started vaccination with other vaccine providers such as Sinovac’s CoronaVac and AstraZeneca. 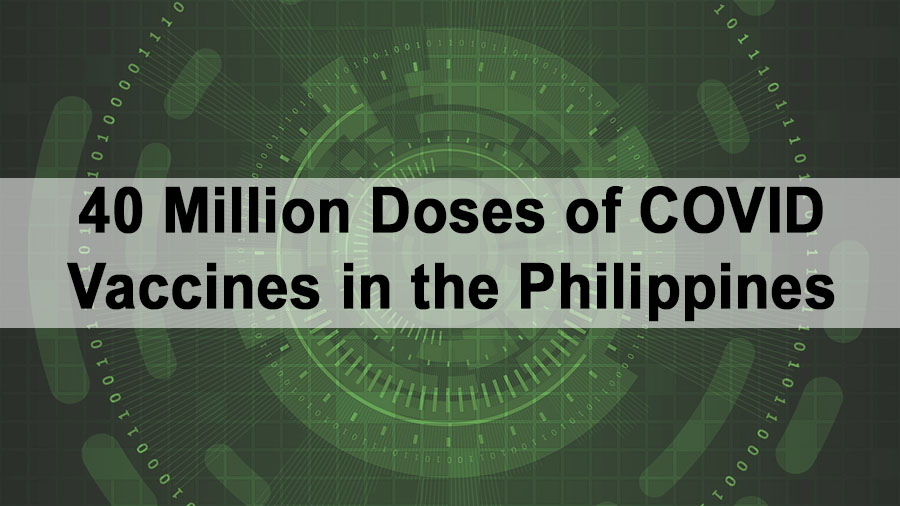 The Philippine government has made the biggest vaccine procurement for 2021 with the signing of a supply agreement for 40 million doses of Pfizer-BioNTech vaccines.

This was announced by the National Task Force against COVID 19 Chief Implementer and vaccine czar Secretary Carlito Galvez Jr on Sunday, June 20.

“We are very happy to report that the government and the management of Pfizer have finally concluded our negotiations. Secretary Duque and I signed yesterday the supply agreement for the biggest and most decisive deal we had for 2021,” Galvez said.

“I would like to thank my colleagues from the Philippine vaccine negotiating team from the Department of Finance and our multilateral partner for tirelessly working to secure these much-needed shots that will benefit 20 million Filipinos,” he added.

According to the vaccine czar, the deliveries of 40 million doses of Pfizer-BioNTech vaccines will begin “after eight weeks starting August” and the shipments will be delivered in bulk.

“The vaccine demand has begun to ease up for many big and rich countries, as most of them have already acquired more than enough vaccines for their population and have vaccinated many of their citizens. This has allowed the manufacturer to commit to us that deliveries, though still to be made in tranches, will be in bulk,” he pointed out.

The procurement of the 40 million vaccine doses will be financed through a multilateral arrangement with the Asian Development Bank (ADB).

Galvez explained that the loan funds from multilateral partners such as the ADB follows a direct disbursement scheme wherein payments are paid directly by the fund manager to the vaccine manufacturer.

“Through this scheme, the Filipino people can be assured that our transactions on vaccine procurement will be transparent, as the funds will not pass through the hands of any government official or agency. Wala pong dumadaan na pera sa amin,” he emphasized.

The COVAX facility has also committed to deliver a total of 44 million doses to the country this year, bringing to 157 million doses the total number of doses secured by the Philippines.

Meanwhile, around 16 million doses from Novavax and Johnson & Johnson are still under negotiation.

“The vaccines from Pfizer will significantly boost our national immunization program and will enable us to realize our goal of achieving herd immunity by yearend. This is another positive development that will give a happy and better Christmas for all Filipinos,” said Galvez.

The Philippines has recently breached the eight million mark in the total number of vaccines administered. As of July 18, 8,050,711 jabs have been administered nationwide.

The country also recorded its highest daily vaccination rate of 322,929 last June 15. For two consecutives weeks in May, the government was able to inoculate more than a million per week.

Galvez said that the succeeding vaccine deliveries will push the daily vaccination rate to 500,000 by the third quarter and at least 740,000 by fourth quarter.

LGUs need to be ready

Galvez reiterated that preparedness on the part of local government units (LGUs) is “imperative” with the confirmed procured supply from Pfizer.

“We again emphasize for LGUs to ensure third party logistics and cold chain service providers for very sensitive vaccines like Pfizer, Moderna and Sputnik V. We don’t want any vaccine to be wasted because of spoilage and mishandling,” the vaccine czar said.

Pfizer-BioNTech vaccines have storage temperature requirements of -80 to -60 degree centigrade while Moderna and Sputnik require -20.

Galvez said the government will deploy the procured Pfizer doses to all provinces and regions across the country through ‘hubs and spokes’ throughput.

“We intend to deploy the Pfizer, Sputnik V and Moderna vaccines as soon as possible and distribute it even to rural areas and communities. However, this will not be possible if the receiving LGU is not ready to handle these types of vaccines,” said Galvez.

The vaccine czar said that scheduled delivery of Pfizer and Moderna will coincide with the opening of the national immunization program to the general population including those under the 12-15 age bracket.

Earlier this month, the Food and Drug Administration amended the Emergency Use Authorization for the Pfizer-BioNTech vaccine, allowing it to be used for aged 12 to 15.

However, the NTF clarified that the adult population and the vulnerable sector will still be given priority in the vaccination program.

Galvez said the vaccination of 12 to 15 year-olds may be conducted in the later part of the year, as the country increases its vaccine inventory and completes the inoculation of the priority sectors.