Flooding in Dumaguete and Negros Oriental 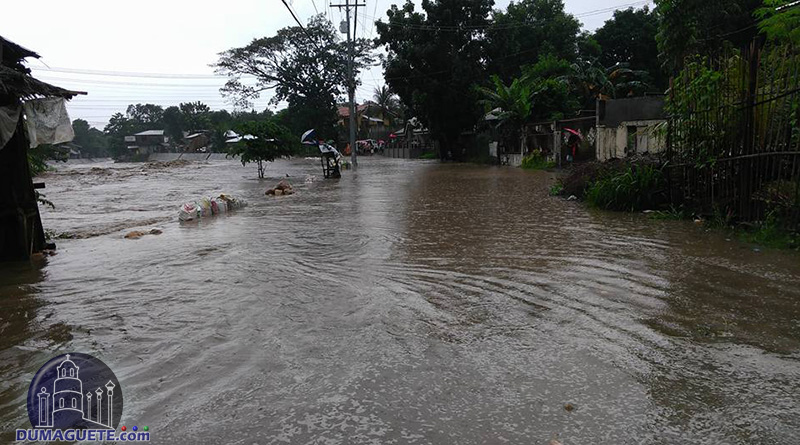 Dumaguete and other parts of Negros Oriental were flooded Monday due to heavy rains.  As such, rescue teams and resources were deployed by authorities and the residents were keeping watch on the height of the water in the rivers and low-lying areas.  Classes at the pre-school, elementary and high schools levels all over the province were cancelled through the issuance of a directive from Negros Oriental Governor Roel Degamo citing Section 2 of Executive Order No. 66.  It was also announced by Adrian Sedillo, executive officer of the Negros Oriental Provincial Disaster Risk Reduction and Management Council (PDRRMC), that work in government offices were suspended.  Those in the private sector is discretionary.  A similar order was also issued by Dumaguete City Mayor Felipe Antonio Remollo.

Residents along the river banks of the Banica and Okoy Rivers decided to leave their houses as water levels continue to rise although some decided to stay in their residences and just monitored the rising waters.  Breakwaters and dikes were destroyed along the Okoy River which is called as a “killer” river known to claim lives during floods.  Mayor Remollo, other officials and the city’s Rescue 348 team were at the house of Antonio Dales in Balugo after his call for help as waters from the river scoured the ground on which his house was built and threatened to destroy his house.  Sibulan Mayor Pepe Abiera also announced that some residents are at the evacuation center due to the swelling of the Okoy River as this passes his town from the mountains toward the sea.  In Bacong town, the foundation of a newly-built bridge at the Bambulo Resort was washed out.

Roads closed due to flooding in Dumaguete

Philippine Coast Guard Lieutenant Junior Grade Donna Liza Ramacho announced that trips of fast crafts and passenger motor bancas in the Sibulan, Negros Oriental-Liloan, Cebu route were cancelled due to rough seas.  However, flat-bottomed barges continued with their trips between these two islands crossing the Tañon Strait even with the presence of high waves.

Governor Degamo and other authorities have similar messages to the people to continue monitoring weather updates, even for local disaster risk reduction and management councils to undertake pre-emptive evacuation if necessary, as the tail-end of a cold front and a low pressure area are causing the heavy downpour.  The Philippine Atmospheric, Geophysical and Astronomical Services Administration (Pagasa) initially issued a “yellow” alert on Monday morning and later changed it to “orange” alert after a few hours, which means that low-lying areas and mountainous areas should be prepared for flooding and landslides, respectively.