Dumaguete City Vice Mayor Alan Gel Cordova and City Councilors will sue City Mayor Felipe Antonio “Ipe” Remollo and Councilor Edgar Lentorio Jr. for their failed food contract. At the beginning of the city quarantine, job order and food contracts were placed with a budget of 10 Million pesos to provide meals from April to June. The food contract was given to Aladdin Restaurant & Café, but the money was not given at all. 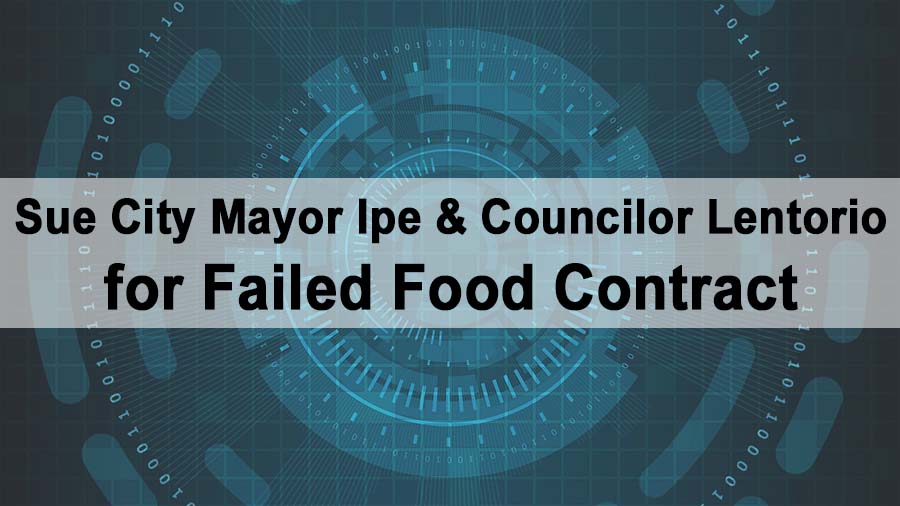 While not public employees or officials, George and Habaña are being impleaded as respondents for conspiring with the public respondents in allowing their restaurant to be used as a dummy to supply food packs to the City of Dumaguete, and attempted to collect payment from the City.

The complaint alleges that the City officials violated Section 3 )e) and (j) of Republic Act 3019 or the Anti Graft and Corrupt Practices Act by giving unwarranted benefits or preference in the discharge of their official functions through manifest partiality, evident bad faith, or gross inexcusable negligence.

The complaint says the City officials knowingly approved or granted benefits in favor of a person not qualified for, or not legally entitled to such privilege….

The officials are also alleged to have “financial or pecuniary interest in the business, contract or transaction in connection with which he intervenes or takes part in his official capacity, or in which he is prohibited by the Constitution or by law from having any interest.”

For the administrative aspect, the Complainants alleged that the three City officials committed grave misconduct and dishonesty in handpicking Aladdin when it did not have a Mayor’s Permit.

The Complainants said the public respondents, in conspiracy with one another, used Aladdin as a front or dummy for some personal financial interest.

The Complainants alleged there is serious doubt that the Bids and Awards Committee pre-qualified Aladdin because according to another food supplier, the choice of suppliers did not pass through the BAC.

“To support payment, the BAC came in to rescue a transaction they never knew to be so highly- illegal, and the process so highly-irregular. And to complete the documentary requirements for Aladdin’s billing statement, the General Services Office prepared antedated Purchase Orders, and the City Social Welfare & Development office also prepared antedated Job Orders to Aladdin,” the complaint read.

In supporting allegations that Aladdin was a mere dummy of Councilor Lentorio, the Complainants said George had disclosed in previous investigations that Lentorio helped in many ways.

George had revealed on record that Lentorio supplied the meat, rented out his law office for commissary purposes, and followed up on his billings with the City.

The Complainants said George had even lied to the Council when he declared it wasn’t Lentorio’s name that appeared in the transactions with 143 Houseware, to which Lentorio nodded in agreement.

The next day after the investigation, representatives of 143 Houseware told the City Council they only dealt with Councilor Lentorio, and that they did not know of George.

The Complainants said the reason they were against payment to Aladdin was “because it was not Mr. George of Aladdin who really transacted with the City government, but Councilor Lentorio. We brought this sentiment to the attention of the City Mayor several instances [who] insisted on ordering payment to Aladdin.”

They said because Lentorio could not enter into a transaction with the City, the Mayor and Depositario made it possible to bring in George of Aladdin.

The legislators also said the Mayor is apparently using his Office to conceal from the City Council the highly-anomalous transaction with Aladdin by issuing a gag order to the Executive departments, preventing them from appearing before the Council to help shed light, without the Mayor’s written consent. Vice Mayor Cordova said the case will be filed this week.

Reached for comment, Councilor Michael Bandal and Karissa Tolentino-Maxino, who actively participated in the investigation of the CoViD meals issue in the City Council, said they will meet with the Vice Mayor to discuss the Complaint before the case is filed. Both Councilors, who are also lawyers, have a different view of how the case should be approached. Vice Mayor Cordova said he would be glad if Councilors Bandal and Maxino would affix their names as complainants.