May 16, 2020 – by Juancho Gallarde posted on Philippine National Agency

With the numbers of shooting incidents in the city, the Dumaguete City Vice Mayor Alan Gel Cordova would like to revoke Helmet Law and allow the Local Government Unity (LGU) to legislate their respective helmet ordinance. Congressman Manuel T. Sagarbarria on the other hand does not believe it is right. Thus showing the “disappointment” of Dumaguete City’s Vice Mayor. 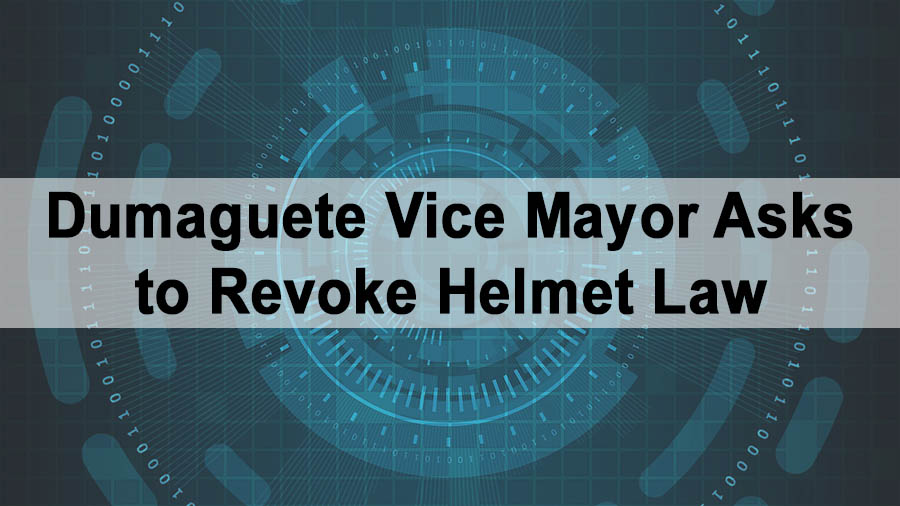 Dumaguete City Vice Mayor Alan Gel Cordova has expressed disappointment on the non-support of the 2nd district representative of Negros Oriental on the move of the city council to have the helmet law repealed.

Cordova reiterated his disappointment of Friday on what he described as the “outright rejection” of Rep. Manuel Sagarbarria of the city council’s resolution seeking repeal of Republic Act 10054, known as the Motorcycle Helmet Act of 2009, following several unsolved shooting incidents here.

The vice mayor had stressed during a privilege speech in the council’s regular session Wednesday that recent killings in Dumaguete and the province had one thing in common: perpetrators were wearing full-faced helmets.

This has hampered police investigation despite the advanced closed-circuit television (CCTV) system of the city as the suspects could not be identified with their faces covered, he said.

Cordova said in an interview that the Sangguniang Panglungsod resolution was for the three House Representatives of Negros Oriental to lobby for the repeal of the national helmet law and allow local government units (LGUs) to legislate their respective helmet ordinances that is fitting and appropriate in their respective jurisdictions.

Copies of that resolution will be furnished to the office of the Speaker of the House and the Senate, he said.

Cordova said he believes regulating the use of a helmet is just one of the tools in preserving the peace and order in the city, and in helping the police in identifying would-be assailants.

On the other hand, Rep. Sagarbarria believes otherwise, stressing that the safety of the people should not be jeopardized because of the crime incidents where culprits used helmets and masks to cover their faces in the commission of crimes.

Statistics show more lives are saved because of the wearing of helmets rather than without protective headgear at all when riding motorcycles, according to the lawmaker.

But Sagarbarria is amenable to a reward system, where sums of money would be offered to anyone for information leading to the identification, arrest, and prosecution of culprits. (PNA)

ECQ and GCQ Extended until May 31, 2020 in the Philippines

DINSGeneral Community Quarantine (GCQ) Regulations as of May 29, 2020
Scroll to top