The Philippine Atmospheric, Geophysical and Astronomical Services Administration (PAGASA) announced that tropical storm Falcon made landfall this morning in Cagayan. Several sea trips were cancelled and classes are suspended in Negros Oriental due to the storm. 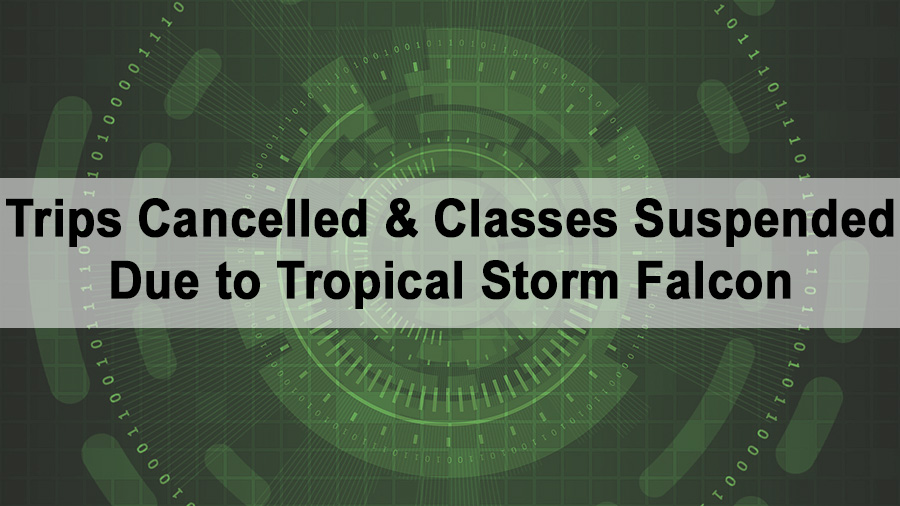 Various sea travels have been canceled due to the tropical storm Falcon. The Philippine Coast Guard in the Central Visayas announced the cancelation last Tuesday. Several water vessels bound from Cebu to a various destination to the Visayas and Bicol regions are canceled.

The tropical storm Danas (local term) or Falcon (international term) made landfall in Gattaran, Cagayan 12:30 am today Wednesday, July 17, 2019. In a bulletin issued 5 am on Wednesday, the Philippine Atmospheric, Geophysical, and Astronomical Services Administration (PAGASA) said Falcon is already over the coastal waters of Aparri, Cagayan, en route to the direction of Babuyan. It slightly accelerated, now moving west-northwest at 35 kilometers per hour (km/h) from 30 km/h in the wee hours of Wednesday. This is fast for a tropical cyclone. Falcon continues to have maximum winds of 65 km/h and gustiness of up to 80 km/h.

According to Lt. Junior Grade Michael Encina, spokesperson of the PCG in the region, there are more than 20 scheduled trips of vessels originating in this city’s pier 1 to 5 and Bantayan Island in Cebu were affected. As of 11 a.m. of Tuesday, three trips of MV Ocean Jet fast-crafts to Tagbilaran, Bohol were canceled, while the noon trip of MV St. Camael to Ormoc, Leyte was also put on hold. Also suspended at noon were MV Ocean Jet fast-craft trips from Tagbilaran to Dumaguete in Negros Oriental, Larena in Siquijor, and Plaridel in Misamis Occidental, to Cebu City.

Four trips of motorboats to Getafe, Bohol from this city and another five from Mandaue port bound for Getafe and Pitogo, Bohol were canceled as well. A landing craft tank, LCT Venture 3, bound for Kawayan, Masbate was canceled. Two motorboat trips from Ubay, Bohol to Bato, Leyte and from Ubay to Hilongos, Leyte were also canceled.

The PCG advisory came after the Philippine Atmospheric, Geophysical and Astronomical Services Administration (PAGASA) Visayas stationed in Mactan Island released a thunderstorm advisory due to a tropical depression.

“The…conditions are being experienced in Daanbantayan, Medellin, Bogo City, San Remegio, and Tabogon north of this city, as well as in Villaba, Kananga, Tabango, and Capoocan in Leyte,” the advisory read.

Due to Typhoon Falcon classes are suspended in different areas in Negros Oriental.  The suspension of classes in the said area is based on Executive Order No. 66 (2012) where the Local Chief Executives (Mayors), as chairmen of the Local Disaster Risk Reduction and Management Council (LDRRMC), can suspend classes in the absence of typhoon signal warnings from PAGASA.

Below is the latest on the expected rainfall as of Wednesday, July 17