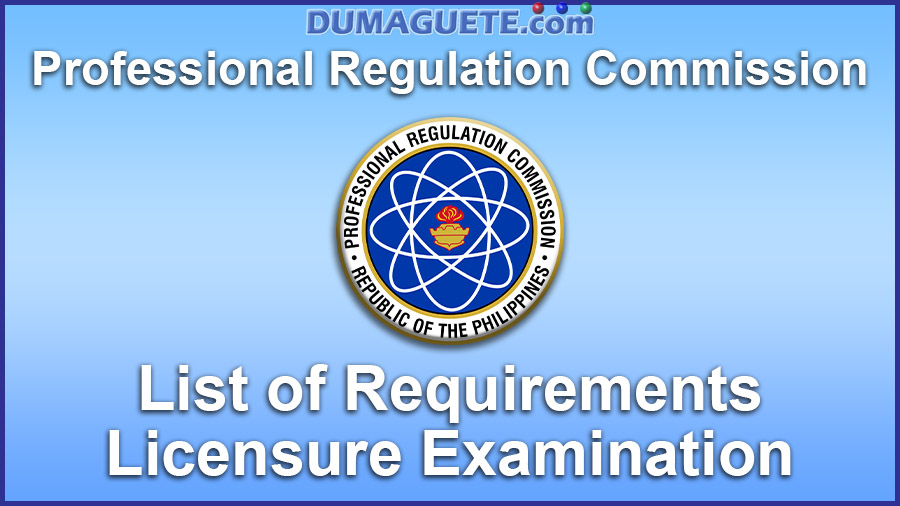 There are different List of Requirements for PRC Licensure Examination depending on your choice of profession. The Professional Regulation Commission (PRC) is in charge of regulating and supervising the practice of the professionals who constitute the highly skilled manpower of the Philippines.

QUALIFICATIONS FOR APPLICANTS FOR CHEMICAL TECHNICIAN:

*Only those who will PASS the Theoretical Phase will take the Practical Phase and pay P400.00

*Re-examination of failed subjects is allowed any number of times

*One removal exam only, period not specified

*One removal exam only, period not specified

Must have graduated from any of the following:

*Foreign citizens applying for the licensure examination shall submit the following documents:

All documents issued/executed abroad shall be duly authenticated by the Philippine Embassy/Consulate stationed in such foreign country, accompanied with the official English Translation thereof, whenever applicable.

*Bachelor of Science degree in any field of Fisheries, and has passed subjects in the curriculum that covered the following areas of study:

For non-degree holders: High School Diploma / Transcript of Records >Notarized Certificate of Experience for five (5) years signed by Registered Master Plumber whose date of registration is prior to the date of employment

*After three (3) unsuccessful examinations, the applicant is required to submit a Certificate of Completion of a REFRESHER Course from a school of medical technology recognized or accredited by CHED- FTB

For Prelims Only (For those enrolled as Medical Student in a Commission on Higher Education (CHED) recognized Medical Schools:

An examinee who fails for the third (3rd) time shall be required to submit Certificate of Completion of a refresher course in a recognized medical school or college and current two (2) certificates of Good Moral Character from the Medical School where he/she graduated from and Hospital/Institution where he/she completed his/her internship before he/she shall be allowed to take the examinations.

*In case of foreign applicants:

Conditioned/Removal Examination:
*To be taken within one (1) year from date of release of results, and if the examinee still fails to obtain a passing grade of 75%, he/she has to take the complete examination.

*Certificate of Mine and Mill Practice
*BS in Geology plus at least five (5) years of practical mining experience- FTB
*After three (3) failures, Certificate of REFRESHER Course in accredited laboratory – FTB
* A citizen of the Philippines or if a foreigner, his country accords reciprocity with the Philippines

*Conditioned/Removal examination – to be taken within one (1) year after the last examination.

*Certification of ten (10) months of internship signed by the Dean and Registrar with school seal.
*After three (3) failures, REFRESHER Course

*After three (3) failures, REST one (1) year
*Two (2) year course graduate from a Vocation or Trade School

*Certificate of Internship program duly signed by the dean/program head

*For Teachers in Elementary Grade
BSEED

*Mental Health Certification – signed by Registered Psychologist
*Has undergone a minimum of two hundred (200) hours of supervised practicum/ internship / clinical experience related to services enumerated in b of Section 3 of R.A. No. 10029 and under auspices of a license psychologist or other licensed mental health professional

REMOVAL – to be taken in the next scheduled examination

REMOVAL – to be taken in the next scheduled examination

Dumaguete.com is a private run website, sharing information we gathered from the offices.
We are NOT the PRC office!
For ANY questions, get in touch with the PRC office!