Tag Archive for: The Voice Phlippines

The Voice of the Philippines Visayas audition venues for both the Regular and Kids Audition. For The Voice Kids audition involving kids aged between 8-14 years old, you are required to be at the venue before 9:00 on Saturday, January 11, 2014. The venue will be used also for the regular audition scheduled for Sunday, January 12, 2014. 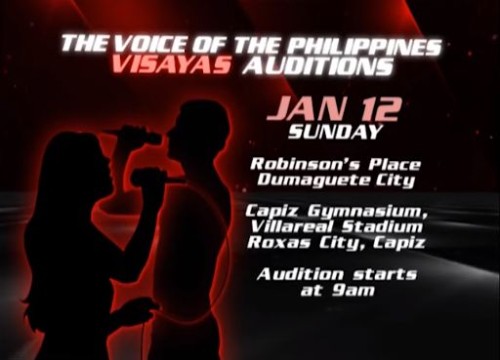 The Voice of the Philippines

What is The Voice of the Philippines

The series is part of The Voice franchise and is based on a similar competition format in the Netherlands entitled The Voice of Holland. The whole format features four coaches or judges searching for a batch of talented new artists, who could become the Philippines’ new singing superstar. The show’s concept is indicated by its title: The 4 coaches will only judge a singer hopeful termed by the show as “Artist” with only his/her vocal talent without prejudice to his/her physical bearing.

It’s with this concept that makes The Voice franchise rise above other known reality talent searches which airs in any known media platform such as The X Factor franchise, the Got Talent franchise or even the Idol franchise. The lucky Artists who have advanced from the audition round would be split into four teams, whom are coached/mentored by the 4 well-known personalities in terms of Singing which in the show, termed “Coaches” who in turn would collaborate with them and choose songs for their artists to perform. Only 16 years old and above can participate. (source:Wikipedia) 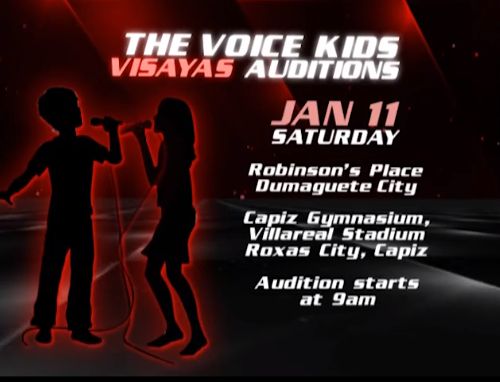 This year is the first time The Voice Kids holds auditions. The first open call auditions was held on November 23, 2013 at Metro Gaisano Pacific Mall in Mandaue, Cebu and was open to kids aged 8 to 14 years old.

In 2014, auditions for the Visayas, Mindanao, and Metro Manila will be held on January 11, 18, and 25 respectively. A separate audition for Luzon will be held on February 1. The show will air on Summer of 2014.It is still unknown if who will be the host and the coaches of the show.