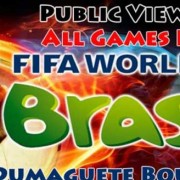 The FIFA World Cup is after the Olympic Games the biggest sporting event of the world.

For the first time in Dumaguete will be a public viewing of the first 2 or 3 daily matches on the Rizal Boulevard. Only the 6:00 am game can’t be shown due to upcoming traffic and street-noise.

While the games are to a rather unholy time with the first always starting at midnight and the last ending around 8:00am, there might be still some guys interested or drop by while doing their nightly exercise. Of course drinks and snacks will be also available.

The Public Viewing of the FIFA World Cup 2014 in Brazil is in cooperation of Dumaguete City and Dumaguete Tourism. From June 13 to July 14 each game will be broadcasted live on a 14×18 ft. screen at Rizal Boulevard. There is no admission fee and each and everybody is welcome to join.

Before the first game of the hosts Brazil will be a 2 hour opening ceremony which will also be broadcasted before the tournament finally kicks off. However, this is a worldwide broadcasted event and the games start as scheduled. If you come in Filipino time, you might miss not only the start, but the entire match.

Schedule of the Public Viewing – Fifa World Cup 2014 in Brazil. 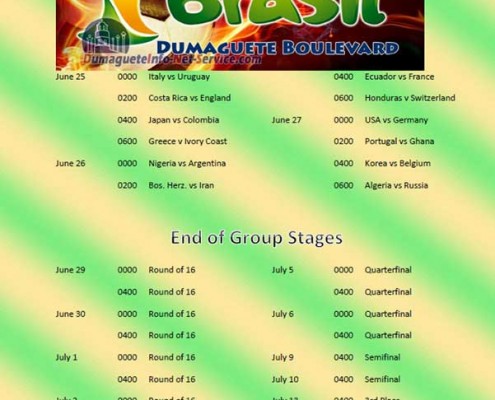 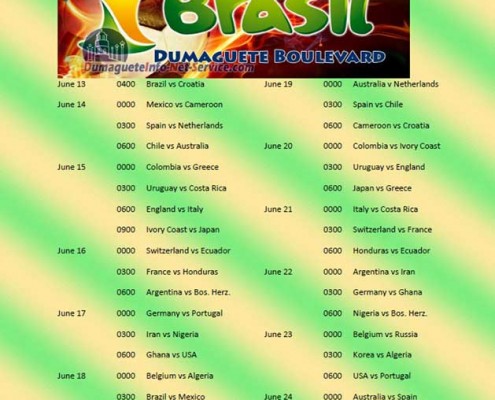