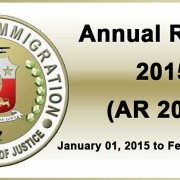 This is a friendly reminder to all our foreign friends and guests in Dumaguete, Negros Oriental and all over the Philippines. It is the time of the year for your Annual Report 2015. All registered foreigners must report in the first 60 days of 2015 to the participating BoI Office. The Dumaguete Immigration District Office is the place to go for foreigners in Negros Oriental.

An alien may be exempt from non-appearance. Provided, the alien appeared during AR 2014 with an accomplished 2014 AR form; payment of P500 Express Lane for non – appearance; submit Special Power of Attorney (SPA) with valid government issued ID of legal representative; and the alien is without any CA 613 and/or RA 562-related deficiencies/liabilities.

The Dumaguete Field office is quite small and very busy throughout the year. You can speed up the process by being prepared. Have all your papers ready, bring the required printouts, copies and/or pictures. Please don’t waste the time of the staff and all others waiting to report just because “you didn’t know that…“).

Don’t rely on “fixer” or other expats who heard from a friend to do it different. Plenty of expats created a huge chaos in 2014 with trying to implement their own rules how to proceed, spreading false rumors and talking nonsense all over the internet, in McDonalds and all other expat meeting points

The website of the Bureau of Immigration is very informative and all required info can be found there.

Keep in mind that it is only one or two days out of 365 and a few Peso, which enables you to stay legally as a guest in the Philippines. Think about that and proceed with a smile