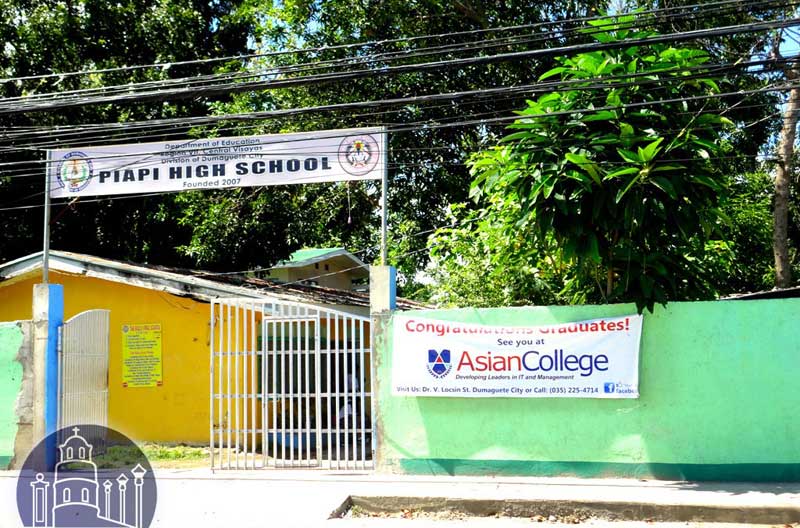 On June, 2007 Dumaguete Vocational High School was established in Barangay Piapi specifically within the premises of North city Elementary School. The school was satellite School of Dumaguete City High School starting school year 2007-2008 with one section in the first year and offered a Secondary Technical Education Curriculum.

After two years of operation, the Barangay Council of Piapi passed a Resolution No. 232, series 2008 requesting the City Government of Dumaguete to support and implement for the opening of Piapi High School in the Barangay.

On June 11, 2009, the City Council of Dumaguete approved the Resolution No. 23, series 2009 endorsing the implementation of the opening of Piapi High school.

During the first year old operation, only the first level was opened offering technical and vocational education. Classes were held at the old classroom of North City Elementary School (NCES) at the northern part of the campus. There were only 40 students enrolled for the school year which were handled by Mr. Alfredo V. Campoy (TLE-Industrial Arts) and Mr. Felixberto G. Caliguid (TLE- Agriculture). Mr. Campoy was also designated as the School’s Teacher-In-Charge.

On April 3, 2011, seventy-three (73) senior students received their diplomas from Piapi High School. Dr. Emigdio B. Omictin was the first graduation speaker and was also dubbed as the Father Piapi High School. He shared to the audience that the Regional Office of the Department of education in Cebu City has approved the permit to operate as a regular secondary school last July 15, 2010, thus making the said date the Foundation day of Piapi High School.

After starting as a satellite school of Dumaguete City High with only one section in the year 2007, Piapi High School developed to a full grown High School with 13 teachers and 2 additional non-teaching staff members. 407 Students divided into 12 sections were enrolled during school year 2013-14.